There are 36 species of small wild cats in the world, based on physical distinction and/or geographic separation; most species are further divided into sub-species. Sri Lanka has four species of wild cats: the Leopard (Panthera pardus), the Fishing Cat (Prionailurus viverrinus), the Jungle Cat (Felis chaus) and the Rusty-spotted Cat (Prionailurus rubiginous). All of them are considered nationally threatened, while the Leopard is considered a globally threatened species. None of the wild cats found in Sri Lanka are endemic. 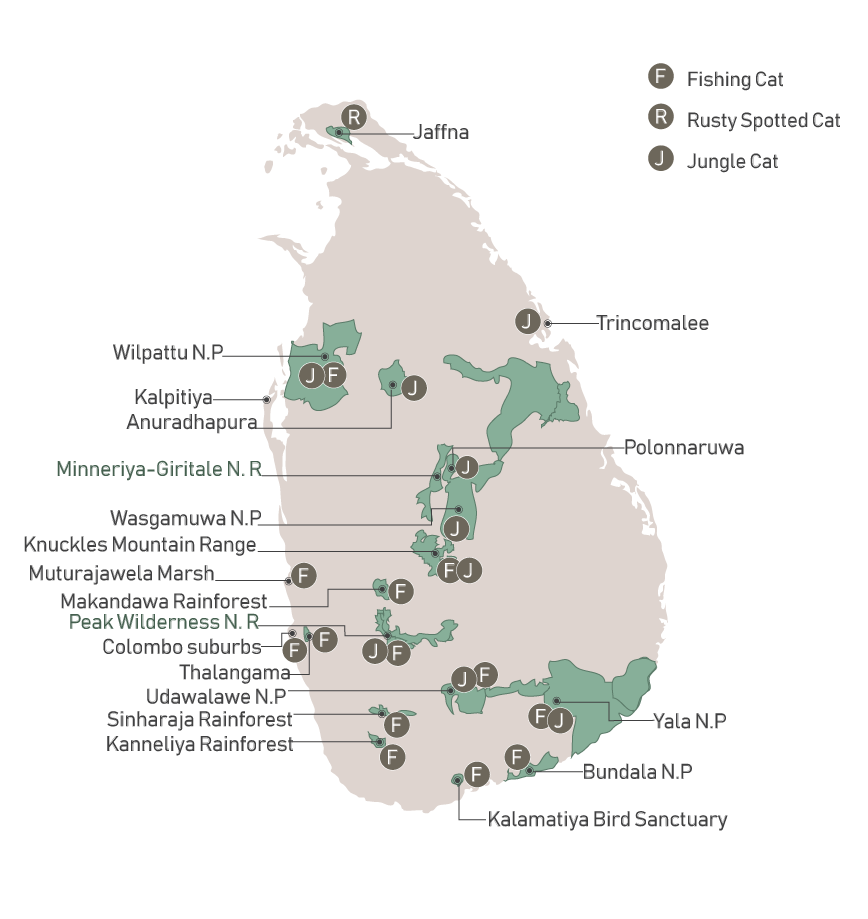 This article focus on the ” 3 Small Cats of Sri Lanka”. 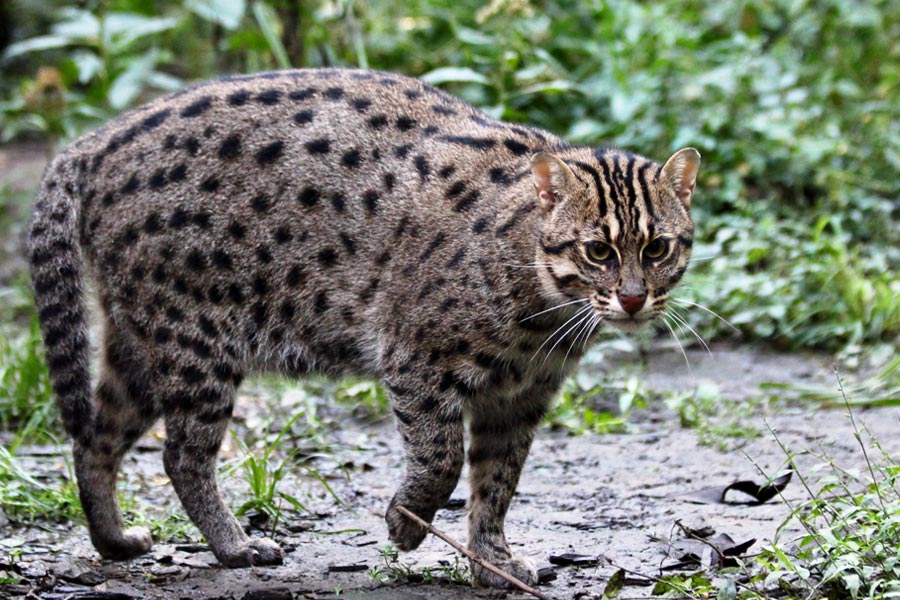 The Fishing Cat is smaller than the Leopard and is found throughout the country including heavily populated suburbs of the capital city of Colombo. It is generally found in wetland habitats such as swamps, marshes, reed beds, mangroves and also visits man-made wetlands such as rice fields. Fishing Cat sometimes can be seen in the daytime in the marshes at Nawala. They are fairly common on the banks of the Bolgoda Lake. There are sights in Battaramulla and also in densely populated areas like Nugegoda as well.

Fishing cats are found discontinuously distributed throughout southern Asia, from Malaysia, Sumatra and Java in Indonesia and Sri Lanka going up to Nepal. The fishing cat has a long, sinuous body and looks like a half-grown leopard. It has a somewhat flattened tail. Its coat is light brown with dark brown irregular spots, fading to white underneath. The backs of its ears are black with a central white spot.

The fishing cat is a nocturnal animal. It moves about and looks for its food at night. It hunts and feeds on fish, small reptiles such as lizards, skinks, frogs and crabs. It has also been known to feed on birds and mammals. It is called Kola Diviya in Sinhala and also Handun Diviya in some areas. In Tamil, it is called Koddy Pilli.

The fishing cat has a double layer of fur so that when they are in the water they do not get wet down to the skin. There is a layer of short hair next to the skin. This is so dense that water cannot penetrate it. Like snug-fitting thermal underwear, this coat helps keep the animal warm and dry, even during its chilly fishing expeditions. Sprouting up through the first coat is another layer of long guard hairs, which gives the cat its pattern and glossy sheen. Their feet have webs between the toes but only halfway.

This helps them to swim easily. Its forepaws have unusually long phalanges (toes) and claws. They do not have full claw sheaths on their paws, so their claws are partially visible even when retracted. Cats have the ability to put out their claws when needed and retract them when not needed. This is to prevent the wear on the claws whilst walking on rough surfaces, etc.

Fishing cats contradict the belief that cats don’t like water. Powerful swimmers, they push themselves along with their webbed hind feet. They have been seen wading and swimming in shallow water, hunting for a variety of aquatic prey, including fish, frogs and toads, snails and crustaceans. They will also take small birds and mammals, snakes and domestic stock such as calves and young goats. Dens are constructed in dense shrubbery, reeds, hollow trees, in rocky crevices, or in other secluded locations. Kittens have been seen in the wild in April and June.

One to three, usually two, kittens are born after a 65 – 70-day gestation, and they weigh around 170 grams at birth. Their eyes are open after 15 days. They start eating flesh after about 50 days, and the kittens are weaned between four and six months.

Adult size is attained at eight to nine months, and the young are independent between 12 – 18 months. Captive individuals have lived to 12 years of age. The destruction of its wetland habitat is the primary threat facing this species of wildcat. It has been found that 50% of the Asian wetlands are disappearing. Fishing cats are also persecuted for taking domestic stock. 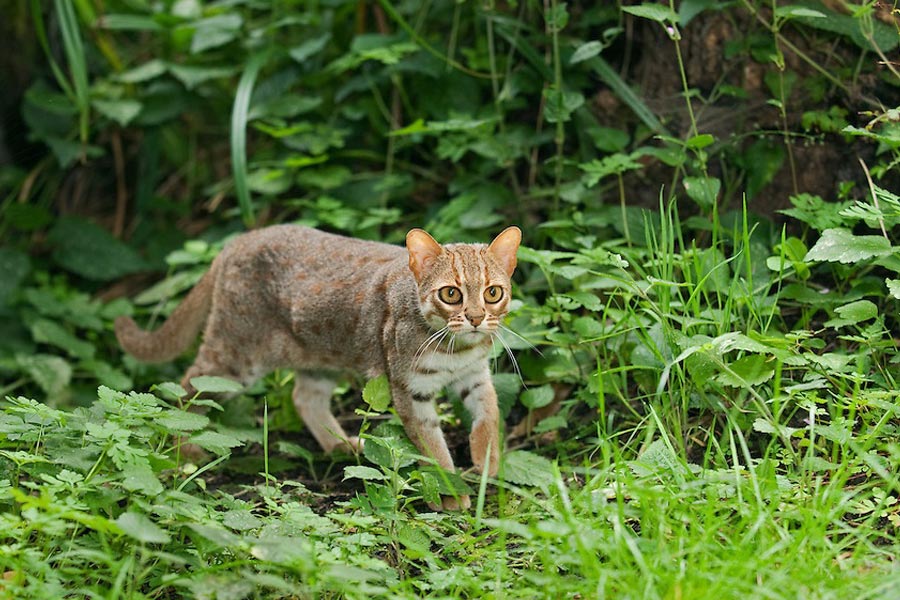 Rusty Spotted Cat is the smallest wild cat in Sri Lanka, similar to the size of an ordinary domestic cat. It is also found in India. Though this cat is widespread, it is rare. The one that occurs in Sri Lanka is unique to the island at sub-species level (Felis rubiginosa phillipsi). It is also called Walbalala in Sinhala and Kadu Poonai in Tamil.

It is ubiquitous on the island, ranging from the mountains to the coastal areas in both the wet and dry lands but nowhere is it common. Its preferred habitats include forest and scrubland. However, it is an elusive animal that is rarely seen. The Rusty Spotted Cat is a nocturnal hunter and feeds mainly on insects, small birds, rodents, frogs and possibly small lizards as well as domestic fowl.The reproductive behaviour of rusty-spotted cats have been observed in captivity and is almost identical to the domestic cat. A litter of one to three kittens is born in a secluded den after a gestation of approximately 65 days.

The kittens lack the rusty spotting of the adults and their irises are light blue.

Nothing is known of their development but it is probably much like that of domestic kittens. The rusty-spotted cat is nocturnal and spends a fair amount of its time in trees and shrubs. They are very territorial, but not much else is known about their behaviour in the wild. Breeding takes place once a year.

The coats of the kittens are duller than the adults. The Rusty-spotted Cat is named after its specific markings. The base fur is usually grey in colour and is covered by small rust red coloured spots which form into solid stripes along the back and on the top of the head – the underparts of the body, the chest bib and the chin are white. It is one of the smallest of the wild cat species, measuring up to about 18 inches in the body with a tail of no more than half its body length. 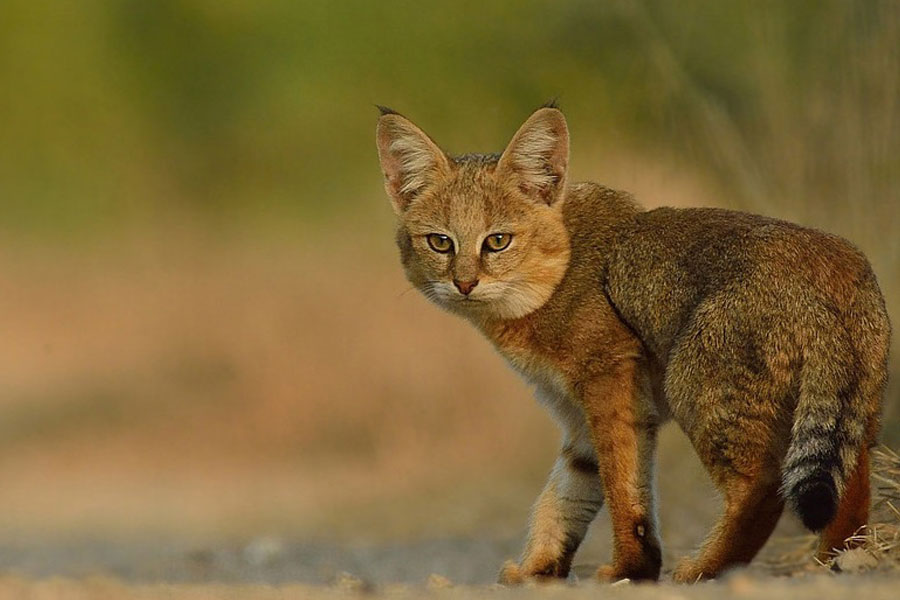 The jungle cat inhabits the jungles and swamps of Egypt, around the Caspian Sea in Russia, Afghanistan, India, Nepal, Sri Lanka, Burma, Thailand and southeast China.

The Jungle Cat is smaller than the fishing cat. It is usually found amongst long grass and scrubland of the dry zone and rarely in the open jungle. It is known to feed on any creature it can overpower, including ground-nesting birds and small mammals such as gerbils, rats, mice and hares.

The jungle cat looks like a large house (domestic) cat with a slightly shorter tail and longer legs. There is a difference between the males and females. The females are smaller. A male weighs about 15 pounds. They also jump into the water and catch fish. However, the jungle cats in Sri Lanka prefer a terrestrial life. The jungle cats in the northern parts of their range have a ground colouration of a greyish-brown, while those in the southern parts of their range are more yellowish red in colour. Markings are restricted to the face and legs, which are faint brown stripes. Their ears are tipped with dark brown to black hair. The jungle cat’s hunting technique is like that of most other cats, stalking and pouncing.

They have been observed feeding on rats, mice, hare, and can jump high in the air to catch jungle fowls and other large birds. They will even kill and eat baby deer, snakes and frogs. They are usually active in the daytime and have a den to go to in case of danger or to rest. The breeding season for the jungle cat is dependent on their range.

The gestation period is about eight weeks. Three or four kittens are born. When they are born the kittens have distinctive tabby markings on a medium grey background. The stripes gradually disappear. After eight weeks, the kittens are weaned and begin to separate from their mother at five to six months old.