Crocodiles are large carnivorous reptiles that are found in the tropical regions of Africa, Asia, America, and Australia. The Crocodilia family can be broken into four main groups; Alligators, Caimans, Crocodiles and Gharials.

A total of 14 extant species have been recognized. Further genetic study is needed for the confirmation of proposed species under the genus Osteolaemus, which is currently monotypic.

A crocodile's physical traits allow it to be a successful predator. Its external morphology is a sign of its aquatic and predatory lifestyle. Its streamlined body enables it to swim swiftly; it also tucks its feet to the side while swimming, allowing it to swim faster by decreasing water resistance. Crocodiles have webbed feet which, though not used to propel them through the water, allow them to make fast turns and sudden moves in the water. Webbed feet are an advantage in shallow water, helping the Crocodile to maneuver through mud and sand. Crocodiles have a palatal flap, a rigid tissue at the back of the mouth that blocks the entry of water. The palate has a special path from the nostril to the glottis that bypasses the mouth. The nostrils are closed during submergence.

Their tongues are not free, but held in place by a membrane which limits movement; as a result, crocodiles are unable to stick out their tongues. Crocodiles have smooth skin on their bellies and sides, while their dorsal surfaces are armoured with large osteoderms. The armoured skin has scales and is thick and rugged, providing some protection. They are still able to absorb heat through this armour, as a network of small capillaries allows blood to absorb heat through the scales.

Crocodilians are more closely related to birds and dinosaurs than to most animals classified as reptiles. Despite their prehistoric look, crocodiles are considered to be biologically complex reptiles. Unlike other reptiles, a crocodile has a cerebral cortex and a four-chambered heart. Crocodilians also have the functional equivalent of a diaphragm by incorporating muscles used for aquatic locomotion into respiration. Salt glands are present in the tongues of crocodiles and they have a pore opening on the surface of the tongue, a trait that separates them from alligators. Salt glands are dysfunctional in Alligatoridae. Their function appears to be similar to that of salt glands in marine turtles. Crocodiles do not have sweat glands and release heat through their mouths. They often sleep with their mouths open.

Senses - Crocodiles have acute senses, an evolutionary advantage that makes them successful predators. The eyes, ears and nostrils are located on top of the head, allowing the crocodile to lie low in the water, almost totally submerged and hidden from prey.

Vision - Crocodiles have very good night vision, and are mostly nocturnal hunters. The light receptors in crocodilians' eyes include cones and numerous rods, so it is assumed all crocodilians can see colours. Crocodiles have vertical-slit shaped pupils, similar to those of domestic cats. One explanation for the evolution of slit pupils is that they exclude light more effectively than a circular pupil, helping to protect the eyes during daylight. On the rear wall of the eye is a tapetum lucidum, which reflects incoming light back onto the retina, thus utilizing the small amount of light available at night to the best advantage. In addition to the protection of the upper and lower eyelids, crocodiles have a nictitating membrane (sometimes called a "third eye-lid") that can be drawn over the eye from the inner corner while the lids are open. The eyeball surface is thus protected under the water while a certain degree of vision is still possible.

From the mostly fish-eating species, like the slender-snouted and freshwater crocodiles(Mugger Crocodile), to the larger species like the Nile crocodile and the saltwater crocodile that prey on large mammals, such as buffalo, deer and wild boar, diet shows great diversity. Crocodiles have the most acidic stomach of any vertebrate. They can easily digest bones, hooves and horns.

Many large crocodiles swallow stones (called gastroliths or stomach stones), which may act as ballast to balance their bodies or assist in crushing food, similar to grit ingested by birds.

Crocodiles lay eggs, which are laid in either holes or mound nests, depending on the species. A hole nest is usually excavated in sand and a mound nest is usually constructed out of vegetation. Nesting periods range from a few weeks up to six months.

Mating always takes place in water, where the pair can be observed mating several times. Females can build or dig several trial nests which appear incomplete and are abandoned later. Egg-laying usually takes place at night and takes about 30–40 minutes. Females are highly protective of their nests and young. The eggs are hard shelled, but translucent at the time of egg-laying. Depending on the species of crocodile, 7 to 95 eggs are laid. Crocodile embryos do not have sex chromosomes, and unlike humans, sex is not determined genetically. Sex is determined by temperature, where at 30 °C (86 °F) or less most hatchlings are females. A temperature of 32 to 33 °C (90 to 91 °F) gives mostly males whereas above 33 °C (91 °F) in some species continues to give males, but in other species it results in females, which are sometimes called high-temperature females.

Sri Lanka has two species of crocodiles. One is the Mugger or Marsh crocodile known specifically as Crocodylus palustris. It is known as the Geta Kimbula in Sinhala.

The other is the Saltwater or Estuarine crocodile with the specific name Crocodylus porosus. In Sinhala it is known as the Hela Kimbula. 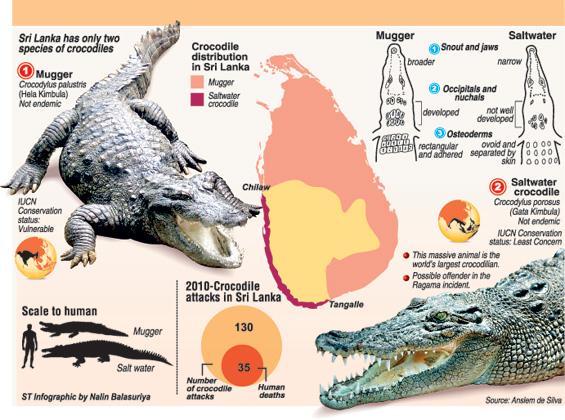 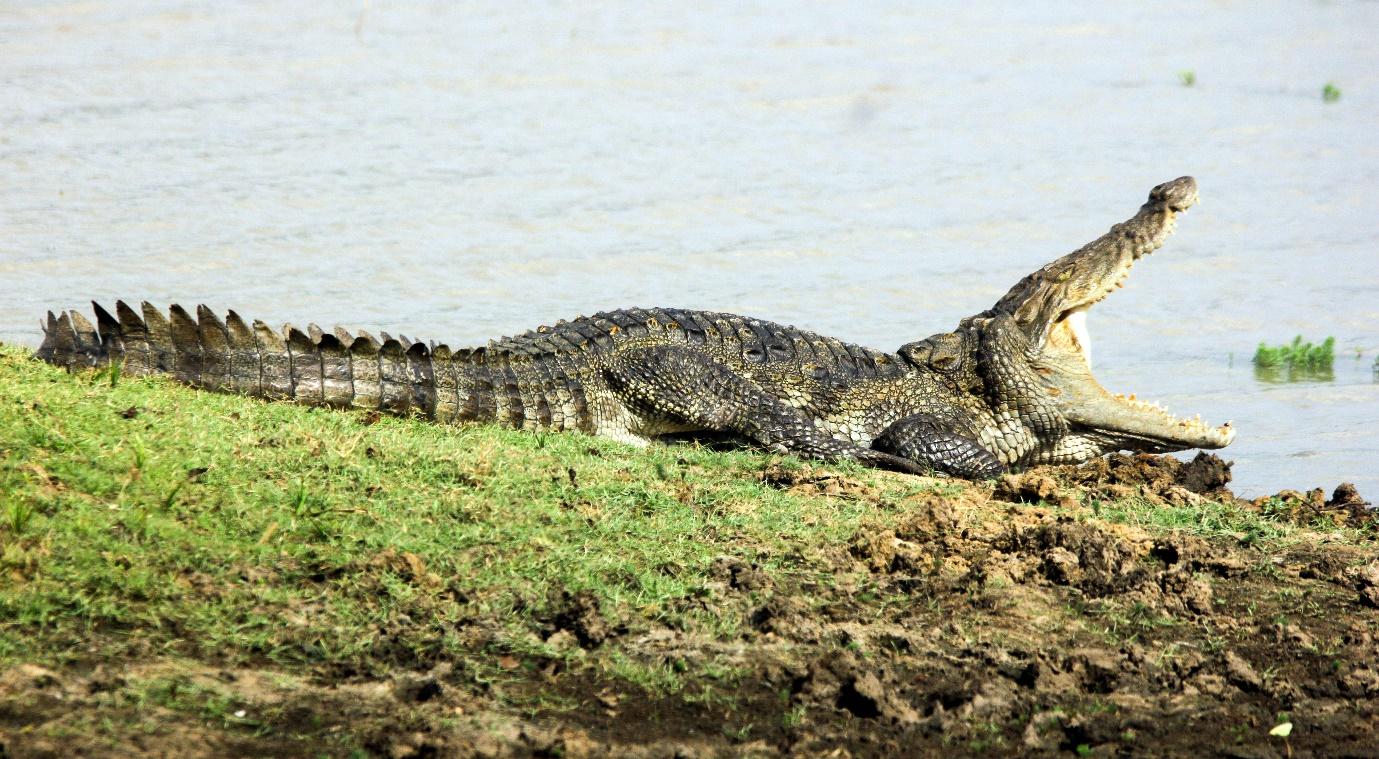 This species is found in freshwater habitats including rivers, lakes, reservoirs, hill streams, village ponds and man-made tanks. It may also be found in coastal saltwater lagoons. This species is a hole-nesting species.

The maximum length for this crocodile is 4-5 meters, and maximum weight is 700Kg. The Mugger is a hole-nesting species, with egg-laying taking place during the annual dry season. Females become sexually mature at approximately 1.8-2 m, and lay 25-30 eggs. Offspring are 7 to 10 inches long when they are born. Nests are located in a wide variety of habitats, and females have even been known to nest at the opening of, or inside, their burrow. In captivity, some Muggers are known to lay two clutches in a single year, but this has not been observed in the wild. Incubation is relatively short, typically lasting 55-75 days. Information about the mugger’s longevity is understudied and any information about it is speculative. Cary and Judge (2000) report this species living 28.4 years in the wild.

Like a number of other crocodilians, C. palustris is known to dig burrows. Mugger burrows in Sri Lanka and India (Gujarat and South India) and noted that yearling, sub-adult and adult Mugger all dig burrows. In Iran they are sometimes known to dig two burrows close to each other, which may be used by one or more crocodiles. These burrows are presumably utilized as an effective refuge from hot daytime ambient temperatures. These burrows play a critical role in the survival of crocodiles living in harsh environments, allowing them to avoid exposure to excessively low and high temperatures (<5ºC and >38ºC respectively) for long periods of time, which may be lethal. Mugger are known to undertake long-distance overland treks in Gir (India), Sri Lanka and Iran.

Populations and Distribution in detail 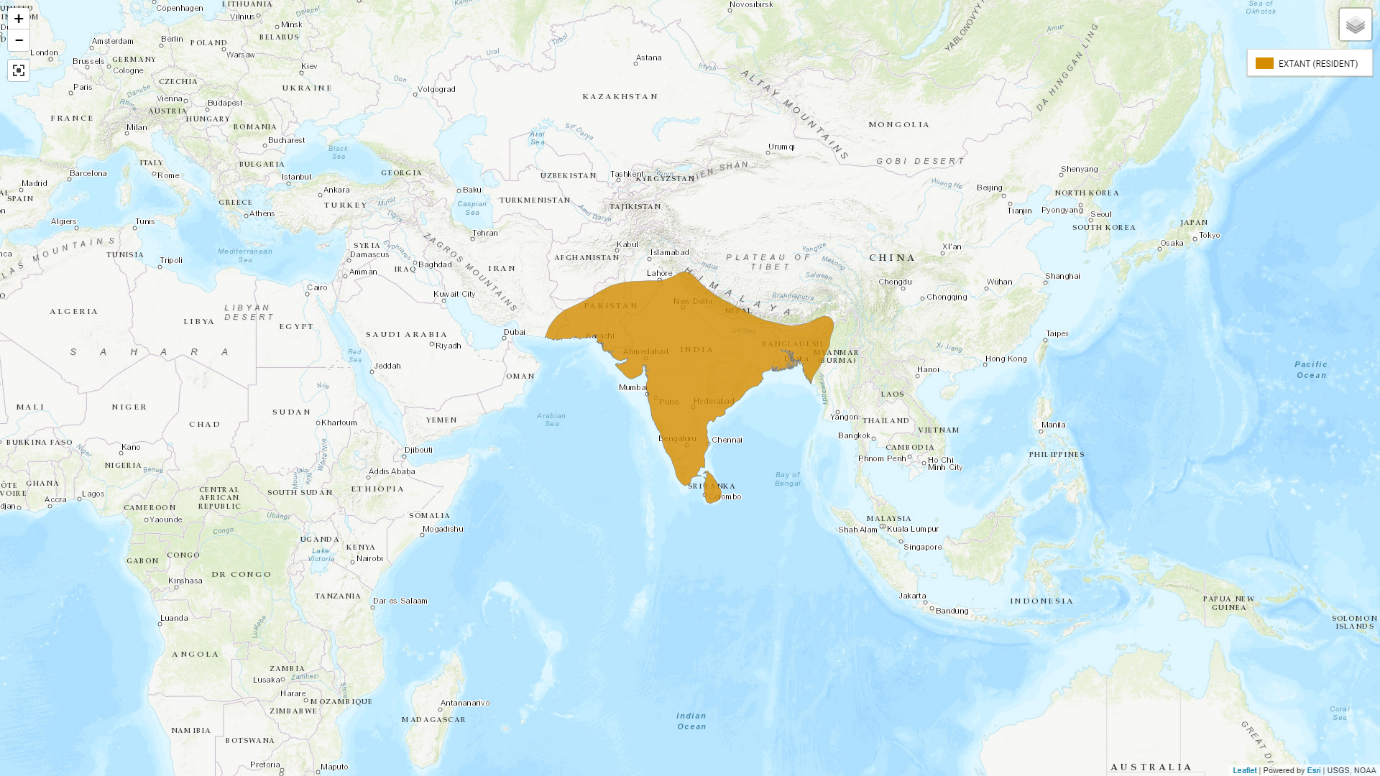 The species status was evaluated during an international workshop in Colombo, Sri Lanka in May 2013. Over 40 regional experts and field researchers contributed current data and observations. In 1989, the overall population size was estimated to be between 2,000-3,000 individuals. Populations declined in the past, but in the current three generation period (approximately 1938 to present) populations in India and Sri Lanka were generally stable or recovering but decline continues in Pakistan, Iran, Nepal and the species has already been eradicated from Bangladesh and Myanmar.

Sri Lanka: Approximately 2,400 to 3,500 individuals are estimated to exist in the wild, of which more than half are concentrated in several National Parks (e.g. Wilpattu, Yala, Bundala). Muggers are also found in many ‘tanks' or man-made reservoirs in the dry plains of the island. Overall, numbers are thought to be increasing and human-crocodile conflicts are widely reported. In other areas, C. palustris is threatened by rapid agricultural and industrial developments.

This species was threatened by habitat destruction due to agricultural and industrial expansion, entanglement and drowning in fishing equipment, egg predation by humans, illegal poaching for skin and meat and the use of body parts in medicine. Crocodiles were often treated as pests to inland fisheries and killed whenever possible. There are increasing incidents of human conflict with this species and this is due to encroachment by humans into the species' natural habitats.

Mugger crocodiles are categorized as ‘Vulnerable’ on the IUCN Red List criteria for threatened species and listed under Appendix I of CITES, this includes species threatened with extinction.

The habitats of the Saltwater crocodile are generally confined to the coastal region but sometimes they travel far up rivers having ascended the Kaluganga up to Ratnapura. It occurs in the estuaries of the larger rivers, appearing to prefer water that is only faintly brackish to that which is more saline. Other habitats include coastal mangroves, marshes, swamps and some inland water bodies. While most crocodilians are social animals sharing basking spots and food, saltwater crocodiles are more territorial and are less tolerant of their own kind; adult males will share territory with females, but drive off rival males.

The saltwater crocodile has a brassy yellow spotted dorsal area and is blotched with black in four or five irregular transverse rows, ventrally it is pale yellow with dark spots under the hind limbs and subcaudals. Once the animal grows to about three meters long, the dorsal colour is almost a uniform black, the head and jaws yellow, and densely speckled with black. The male crocodile is generally between 14 and 17 ft in length, sometimes reaching up to 20.7 ft and weighs between 400 and 1000 kg.

Breeding habits of the saltwater crocodile are different when compared to the Mugger crocodiles. Saltwater crocodiles build a mound-like nest, using any reeds, pandanus, palms, and thick grass. The vegetation with which the nest is built decomposes as time goes on and generates heat necessary for incubation. Females reach sexual maturity at around 10 to 12 years old. Males, on the other hand, do not reach sexual maturity until the age of 16 years.

Populations and Distribution in detail 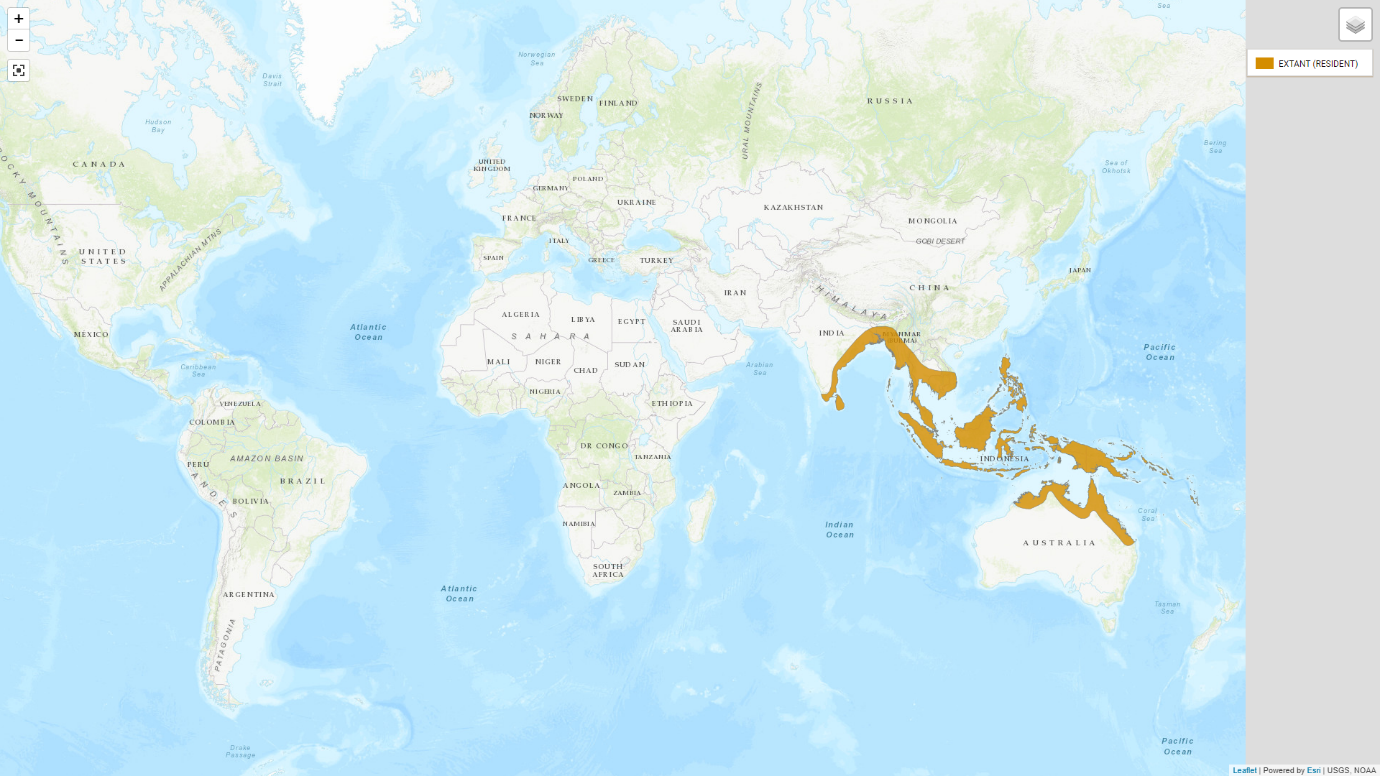 Saltwater crocodiles mainly inhabit estuarine deltas in coastal areas and may sometimes travel long distances up rivers particularly during the dry season. There is mention of saltwater crocodiles occurring in Yala National Park.  These crocodiles are confined to the mangrove marshland area in Kumana.

Conflict with fishermen and net entanglement

Nest and hatchling predation by land monitors, dogs and birds