A British journalist told me that a shortcoming of Sri Lankan tourism is that it has failed to be bold in how it tells its big stories to the world. I am inclined to agree. One of these shortcomings is the failure to educate the world at large that Sri Lanka is the ‘Best for Big Game Safaris’ out- side Africa. It is difficult to imagine that the tiny island of Sri Lanka is the next best to the gigantic African continent for Big Game Safaris. But it is so. 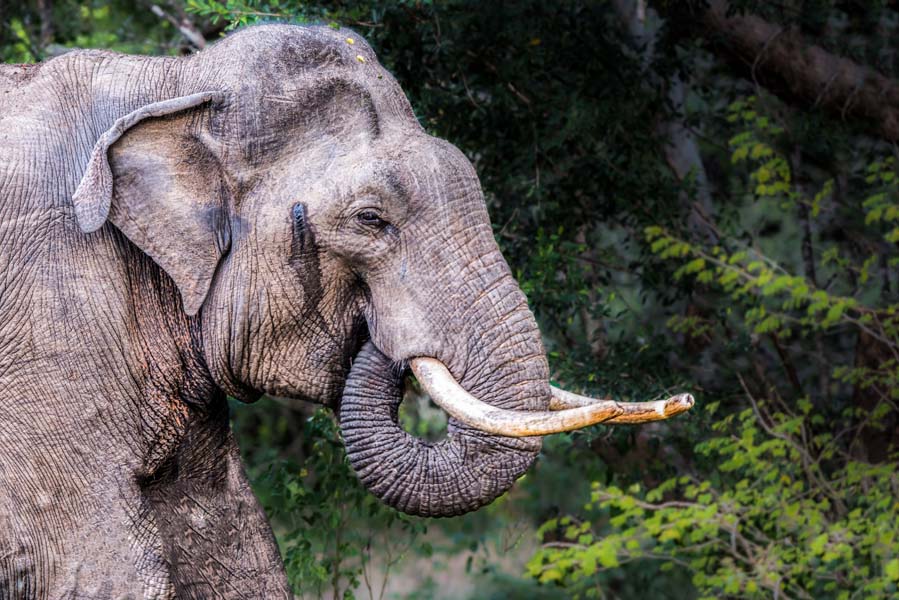 However, Sri Lanka's tourism industry and Sri Lankans as a whole have failed to realize and publicize that Sri Lanka is the 'Best for Big Game Safaris’ outside Africa. This is a big and important story we need to tell. It is one of a suite of stories that we need to disseminate to strengthen Sri Lanka's brand as a tourism destination and in particular as a top destination for wildlife travel.

I first put into print my thoughts that 'Sri Lanka is the best for Big Game Safaris outside Africa' in the September 2010 issue of Hi Magazine. In the article, I explained why we need to create 'a symmetry of phrase' with Africa's Big Five and also factors such as selection criteria to put the Big Five branding on an intellectual framework.

This is a story I had begun to tell over the last nine years. In September 2009 the Sri Lanka Tourism Promotion Bureau (SLTPB) in London arranged for a press evening where Chi- tral Jayathilake and I spoke. The exhibition was themed 'Sri Lanka: The Ultimate Island Safari'. In a sense this is the wid- er and bigger story. However, in terms of carrying a punch line to the media and the public, a subset of that story, that we are the best for big game outside Africa is more potent.

For several years now my team has developed the literature to articulate that Sri Lanka is the best for Leopard and Blue Whale. We have the largest, predictably occurring seasonal concentration of wild elephants anywhere in the world: ‘The Gathering of Elephants’ at Minneriya (and Kaudulla Na- tional Park). More recently, I have ramped up the publicity that Sri Lanka is the best place in the world for seeing and photographing the Sloth Bear. I am also drawing attention that it may be the largest tropical bear or if not one of the biggest (I understand from Dr. Shyamala Ratnayeke that as data is still thin on the ground for tropical bears, there is still some uncertainty in how it ranks in terms of weight).

The whale watching which I helped to popularize in May 2008 from Mirissa and since March 2010 from Kalpitiya shows that Sri Lanka is in the top ten for seeing Sperm Whales. I have used these five animals to brand a Sri Lankan Big Five to rein- force Sri Lanka's position as a Big Game Safari destination in a similar vein to Africa.

Why is the 'Best outside Africa' branding justified? Firstly, let me point out that Sri Lanka does not match Africa as a Big Game Safari destination. It is the nearest counterpart. Anyone familiar with Africa will know that nowhere in the world do you have such a concentration of big game, all in the field of view at one time. The sheer numbers are unrivalled. This arti- cle is about what happens when you look outside Africa what is the next best continent or country? I am also using the pres- ence of five big, charismatic mammals, which inspire awe, are desirable and can be seen with a fair degree of likelihood as a benchmark for branding a destination for Big Game Safaris. 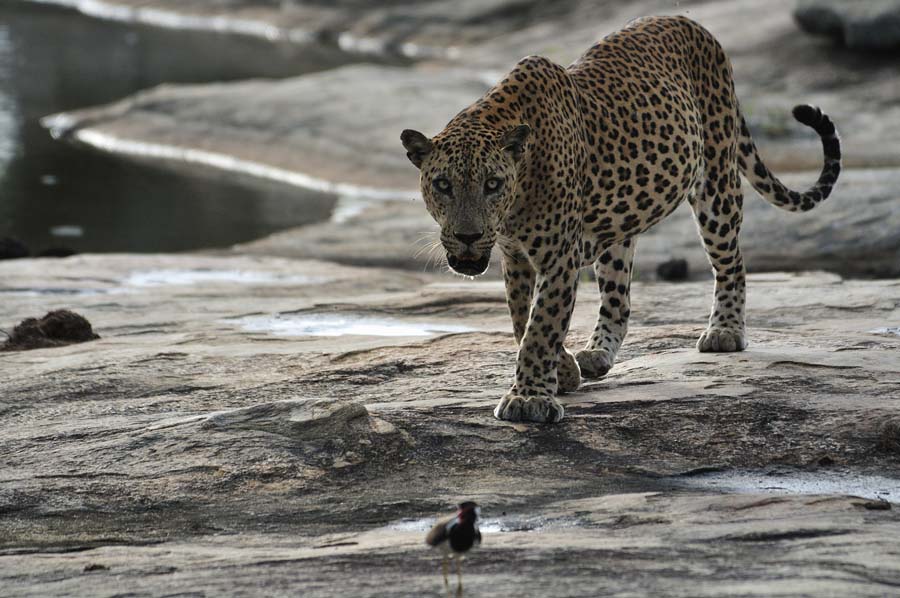 Before we look outside, let me also briefly re-visit one of the criteria for an animal to qualify as being branded for a ‘Big List’. An animal must be capable of inspiring awe and fear be- cause it does kill or can kill people. Let us start with the Afri- can Big Five which comprises of the Lion, Leopard, Elephant, Rhino and Buffalo. All of these animals are big and do kill peo- ple. The awe factor is necessary in the context of safari because subtly or otherwise there is an association with an element of danger. Not only must an animal be able to kill a human being, it must also be big to be physically frightening. Thus predators such as lions and herbivores such as elephants are typical big game safari animals. If you were on your own, unarmed and on foot, you would feel very vulnerable and quite likely fright- ened on encountering one of these animals. Mosquitoes may kill more people than any other visible animal, but one does not think of being on an adventurous safari if one went on a walk in an area with a risk of malaria. Similarly snakes kill, but not enough people will want to see them in much the same way as they would like to see lions and leopards. In Africa and Sri Lanka, the Big Five animals are mammals, but a destina- tion does not necessarily have to choose only mammals for its ‘Big List’.

The awe factor means that many countries outside Africa and Asia will struggle to find a Big Five. Let us briefly run through the continents. In North America we have the three bears, the Black, the Brown (and the sub-species the Grizzly) and the Po- lar Bear. There is also the Cougar or the Mountain Lion. Try- ing to see these four species, five if you add the Bison, in one tour will be difficult and enormously expensive. This would violate the criteria I have listed, that a tour for a Big List must work as a mainstream package tour in terms of time and cost.

In South America one has the Jaguar which can kill people, but it is very elusive. Despite its huge bio-diversity, there are not many qualifiers for a Big Five list. The same can be said about Antarcti- ca, which does not have a single mammal which is feared, although seals can potentially inflict harm.

In Australia, one of the large species of Kangaroos can potentially disembowel and kill a human being. So can birds like the Cassowary, Emu and the Ostrich. However, although not explicitly stated, the discussion of cri- teria for animals which make it to a Big List centres around mammals. People are unlikely to fly to Australia mainly for a safari to see Kangaroos, although people do go there and to Antarctica for their wildlife as a whole. 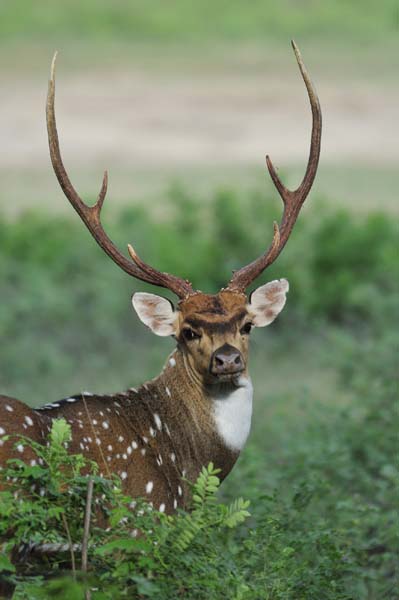 In Western Europe we have the Brown Bear and in certain Eastern European countries we also have the Euro- pean Bison, which could potentially kill a human being. The Wolf is once again spreading in Western Europe and although it does not kill people, has always inspired awe and fear and can be considered in a European Big Three. If we were to remove the criteria of charismatic predators which are feared for killing people, animals such as the Lynx could make it into a list. Parts of Eurasia also have the Tiger, the Siberian Tiger being a special example. But as you can see, outside Africa and Asia, one will not find five big mammals which inspire awe and fear with their potential to kill people. It tends to be such mammals that fuel the desire for Big Game Safaris.

In Asia, with the exception of India and Sri Lanka, large mammals are very difficult to see. In India, it may be easier to go in search of tigers than it would be for elephants. The Leopard and Sloth Bear are difficult to see. Since 2001, when the team at Jetwing Eco Holidays began to market Sri Lanka for its leopards and big game, wildlife photog- raphers and wildlife enthusiasts from India are increasingly visiting Sri Lanka to see and photograph Leopard, Sloth Bear and Elephant. When the ease of viewing or strike factor is taken into account for these three mammals, Sri Lanka ranks well ahead of India. Sri Lanka does not have the most charismatic land mammal of Asia, the ti- ger. It also does not have the Asiatic Lion which is restricted to the Gir Forest in the state of Gujarat in India or the Rhino. However Sri Lanka compensates with two awesome animals, the Blue Whale, the largest animal to have ever lived in the planet and the Sperm Whale, the largest toothed whale. India is not short of animals for a Big Five.

But the distances which need to be travelled and the time required makes it prohibitively expensive and dif- ficult, compared to Sri Lanka. When the likelihood and cost of seeing and photographing four or five charis- matic mammals (my barometer for big game safari potential) on a two week safari is considered, Sri Lanka is by far the better destination.

If you compare India and Sri Lanka as destinations for seeing Asian wildlife and mammals in particular, it is also the case that it is much easier in Sri Lankan national parks. Yala is only rivalled in Asia by the core zone of Corbett National Park for the ease of seeing mammals. Mammals are relatively easy to see in Sri Lanka and expectations of most visitors when it comes to safari pivot around seeing mammals.

According to classical bio-geographical theory, small islands don’t have large animals. Sri Lanka contradicts this theory. This is because until relatively recently in geological terms (about 10,000 years ago), it was not a small island. The sea levels were much lower during the last glaciation and Sri Lanka was a part of the large Eurasian land mass. This resulted in large land animals being on what subsequently became isolated as an island by rising sea levels. What is more, we find large land animals in significant concentrations giving rise to spectacular wildlife viewing spectacles like ‘The Gathering’.

To summarize on some of my claims expressed above, it is pertinent to reproduce here two tables. Table 1 lists the criteria for an animal to qualify for a Big List and Table 2 lists the ranking of my Big Five nominees in terms of their ranking for ease of viewing in the world and in Asia.

My objective behind creating tags such as ‘Sri Lanka is Best for Big Game outside Africa’, ‘Sri Lanka: The Ulti- mate Island Safari: and ‘Sri Lanka’s Big Five’ is to create livelihoods in rural Sri Lanka through wildlife tourism by monetizing Sri Lanka’s bio-diversity. I do hope more people will take stock of Sri Lanka’s uniqueness, a tiny island that is a big game safari counterpart to a vast continent. It is now time for more people to carry the story that Sri Lanka is the Best for Big Game outside Africa and to see the island as a continental alternative.

This article was first published as cited below.